Can you see me now III.


There is a dialog to go with this.. to be added soon.

Drive careful!  Details on purchasing these lights soon.
Posted by US Bocce guy at 4:57 PM 1 comment:

Yesterday a guy told me that I had the wrong bike for Florida...   He drives a HD and said that it was hardly worth having down here because things are so flat and straight.   I guess he sticks to the 30% (if that) of FL Roads that are paved...

This is my third trip to the sunny south and I have enjoyed everything, once I learned that pavement stops at the edge of the road.  First time I saw the sign reading, "Pavement Stops Here," I caught my breath...  That day with the ADV Rider group really woke me up.  Look up the video about the Kings Highway from March, 2013.  What a hoot!

Since then My travels incorporated sand from coast to coast.  El Mirage Dry Lake was the funnest because it was deep but fairly firm.  (click for video)   Last weekend was the freshest.  GS Giant Kyle Brandenburger, Naples, FL, invited me out for a day around Punta Gorda with friends Steve and Jim.  We met up at a fuel stop near the Seminole Casino and headed north of two-lane roads.  A farm looking dude at an American Legion directed us to a dirt road through orange groves west toward the Webb WMA where we spent the afternoon.   The sand roads were pretty tightly packed, but 7" of rain left plenty of puddles to contend with.

Early afternoon, before the WMA we passed the new (still under construction)Florida Track and Trail Motorsports Park where an electrical contractor invited us in for a tour on two wheels.


That motocross track is going to be quite a show place... they say there about 20 miles of trails in the park, but we didn't get further than the track.  Many thanks to the guys who let us get a sneek preview! 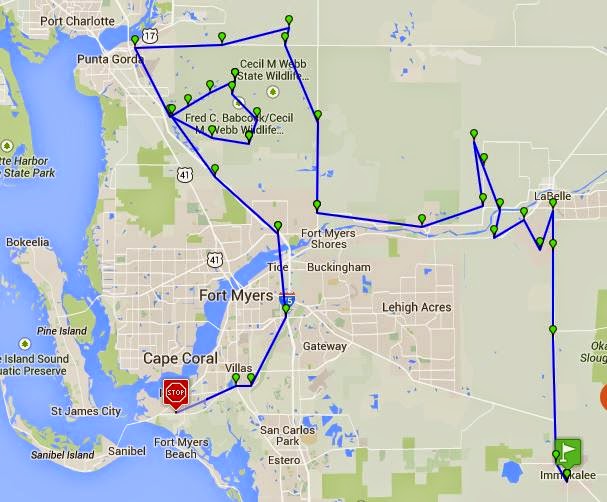 Finally, we rolled into the WMA and Kyle and Steve launched us into a couple hours of fun on the trails of the park.   Flat as a pancake, but plenty of scenery, including cattle on our trail, and a fair amount of muck.  We had several dead-ends, due to either fences, downed trees or just deep looking swamps that had engulfed the trails following recent rains.  Nobody got stuck, although Steve was so far off course (trying to get out of a swamp) that we could hardly see his helmet through the brush.

Let's see what Kyle can scout up for March 1st when I get back to Ft Myers to start another two-wheels-only motorcycle month from here in Ft Myers, FL.