Now that I'm back in the house and have time for maintenance and planning, let me remind you that I use AMSOIL lubricants in all of my vehicles.   Superior protection and decreased maintenance costs through less frequent oil changes and longer engine life.

You can find details on the AMSOIL products on my dealer webpage:

Here are just a few of the product offerings:

20W-40 Synthetic V-Twin Motorcycle Oil
High-Performance Lubricant for Engines and Transmissions. API SM, JASO MA, API GL-1
A premium oil designed for those who demand the absolute best lubrication for their motorcycles. It is the result of extensive research and is specially formulated to excel in all areas unique to motorcycles, including the high temperatures of air-cooled engines, wet-clutch lubrication, extreme-pressure regions of gears and chains and rust protection. AMSOIL 20W-40 Synthetic V-Twin Motorcycle Oil is multi-functional and engineered for Victory® and model-year 2013 and newer Indian® motorcycles.

10W-40 Advanced Synthetic Motorcycle Oil
API SG, SL/CF, CG-4; JASO MA/MA2; ISO-L-EMA2; API GL-1
Advanced multi-functional formula for both domestic and foreign motorcycles. Recommended for high-performance liquid or air-cooled 4-stroke engines and transmissions and both 4- and 2-stroke motorcycles. Wet-clutch compatible. Not recommended where an API GL-4 or GL-5 gear oil is required.
Posted by US Bocce guy at 7:09 AM No comments:

Return to IL for spring.

Happy Spring!    Live, now back in IL for a while.   Will expand on my FL travels as the days go by... let me just say that the 6-week adventure with g/f Donna was super and we are planning to upgrade out vehicle situation presently.  Stay tuned for our toy-hauler planning and future travels.

In the meantime, here's just a hint of what went on bike-wise during out hop-scotch vacation.  Will add pics and videos as time permits.

Florida is a great place to meet friends and play in the middle of winter.  Will have to consider a longer stay next year... or maybe head west.

I will fill in some blanks later, but now I'm in northern Florida getting ready for bike week, having enjoyed six or eight weeks touring with my girlfriend and life is good.  She is now back in IL sitting out the balance of winter.

Last Saturday I took to the trails in South Florida in an area called "the squares", east of Everglades city in a national Park. The guys I wrode with live down here in Florida for the entire winter and they have been wriding every weekend.  I have been vacationing and getting out of shape.  Three hours 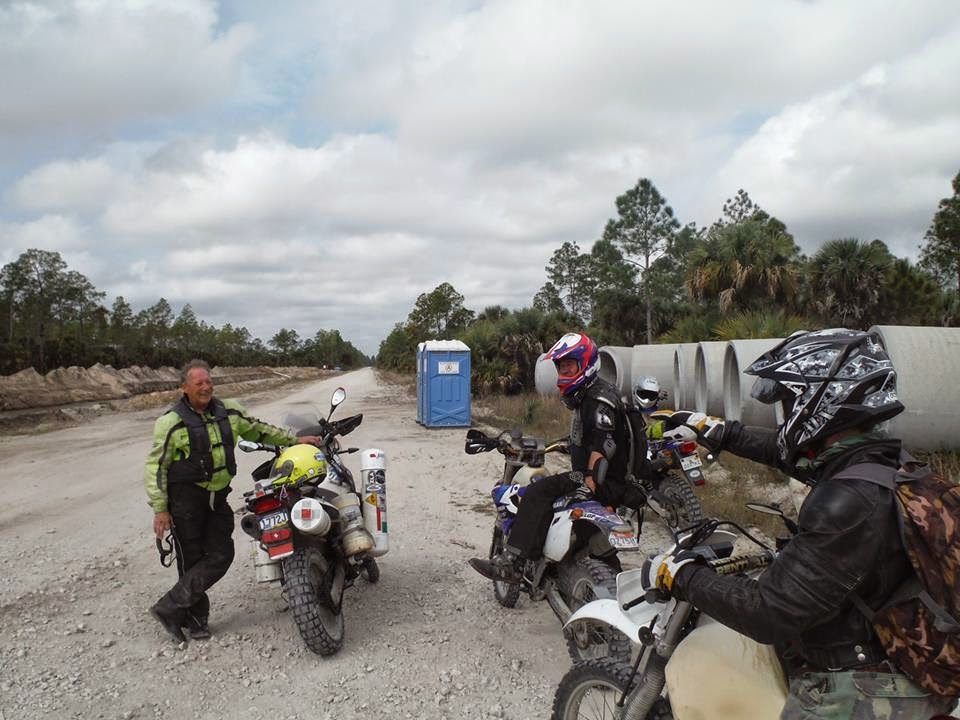 into the ride my muscle system completely gave out. We had a great ride. I would do it all over. I need, about three times a week, to get myself back in shape but by noon I had to park the bike and send the other guys ahead.  I gobbled down a candy bar and a bottle of water and relaxed for an hour. I can tell it's going to take weeks to be in shape for this season and I only have until Saturday for the ADV writer trans-Florida ride.   250 miles eash day... lots of sand... I'll update you on that early next week.

Next week after doing the weekend ride with ADV we will camp at holiday travel RV Park for Daytona bike week with my buddy Cliff Loose and will be taking in the entertainment and a couple projects for the entire week.

Being on two wheels for the next two or three weeks I will try to take a couple days to catch up on blogging and keep you informed. Otherwise I'll see you along the routes. Have a great week.