Motorcycle trials, also known as observed trials, is a non-speed event on specialized motorcycles. The sport is most popular in the United Kingdom and Spain, though there are participants around the globe.
Modern trials motorcycles are distinctive in that they have evolved to become extremely lightweight, lack seating (they are designed to be ridden standing up) and have suspension travel that is short, relative to a motocross or enduromotorcycle.

Back in the late 70's and early '80's I rode this sport called Observed Trials.  Great fun.  Great exercise and great for the mind.  About midway into my second year I started winning and enjoyed competitions even more.  My local friends Mike and Spike (brothers) and I rode all over the midwest.  As the movie of the same name depicts, "On any Sunday."

My ride for the past 5 years has been a BMW G650GS Sertao.  At 421 pounds, it's nimble offroad and at speed.  I enjoy the backroads and firetrails emensely.  Problem being, I don't have any local buddies to ride with and I'm not thrilled about being out in the trails withour a partner... It's a lot to carry, if the need should arrise.

This summer I happened across a Gas Gas (where do these names come from?) TXT70 trials bike for less $'s than I had in the bank.  It's a light weight, but the frame is full size and It will give me enough bike to experiment for a few months to see if I really want to get back in the game.

For the first few weeks I did parking lot exercises at a park about a mile from here.  Lots of space, some drainage ditches and grass.  Didn't take  long to figure out two things.  A) I'm in terrible physical condition and B) 15 minutes in a parking lot is pretty boring.  It's interesting though.  I can do 12' diameter circles all day.  Throttle control is a bit jerky.  Brakes help stability.

I did some proctice on balancing with the front wheel in the botton of a swale.  Every little bit of side-to-side support helps.  I wasn't getting vary far, and by the end of a few weeks I was also bored at taking 30 minutes to get there, setup and then ride for only 15 minutes...

Now I have an improvement on the practice plan.
Two weeks ago I went to a trials training school hosted by Northwest Cycle featuring the 6-time national champion Flying Ryan Young.  With 22 riders and a beautiful Saturday we really got worked over and started gaining ground on critical techniques.  Ryan took plenty of time adjusting and setting-up each bike before we started training.  Handlebars moved forward.  Brake pedals leveled, levers turned upward.  He explained the logic in each adjustment. OH,,, and 6 PSI front tires with 4PSI rears.

Once we started riding Ryan would take 5+ minutes to explain a maneuver and then demo it for us.  Once we thought we had it in mind we'd all start riding and executing.  Thanks to our host, Jeff, we had plenty of grassy space for initial practice.  Balance, front wheel hops, rear wheel hops, tight turns.  Best tip on turns was to force youself to move your head over to the outside hand grip and focus on your gloved hand.  That really leans the bike down hard to the inside.

Then we headed to an up-hill powerline for off-camber turns, clutch friction-point training and downhill braking.  After lunch we headed into the woods where Ryan had taped off one "section" for us to practice on.   I really sucked on that one.

Sunday was more of the same plus floater-turns and flip-turns (in a constant drizzling rain).  These turns were way beyond mey skill level at this point.

The variety of skill levels was wide and interesting.  TWo guys were obviously "pros" and a few more were very good.  The rest of us all had challenges but everyone was very supportive and helpful.  Then we headed into a wooded area loaded with fallen logs and lots of slick clay.  Amazing how easy it was to move around on the bikes, compared to trying to walk...

Ryan went over several methods of climbing over logs in different situations.  Great fun but my thighs and upper arms were jello by the time we broke for lunch. I headed out early to make the 6 hr drive home, but would (will) do another class next time it's offered.

Now then... With that training out of the way, and having heard many of Ryan's stories about his background in trials, I'm back home and working on the basics.   I'm in the middle of week two, on my own and not even leaving the garage...  All balance and hops for now.

Last week I started doing 5 minute exercises every hour or so.  I ended up with 5 training periods each day for 8 days now.   The first few days I would stagger back into the kitchen puffing like crazy.  That's already improving.  My balance (standing in one place with feet on the pegs and bars turned 45deg, has me staying upright for more than 60 - 120 seconds on most attempts.  I work better with the bars turned to the right so this week I'm concentrating on the bars turned to the left.

Once I get my position it's a feeling like I have a 4" wide column of safe space that I need to keep my frame within.  Ryan explained to use the bars to keep centered and turn the bars in the direction you feel you are falling to find suppport.  Easier said than done but it's improving.
For starters I tried wedging the front wheel against a stair to the kitchen.  That gave me just a bit of side-to-side support to make balancing easy.  Once I was up on the pegs I worked on getting steady and gradually moved away from the stair and out on open floor.  AS I am gaining balance I'm working the bars for support as I lean to one side or the other and then bounce on the pegs to get ready for wheel hops.

Amazing how much energy this takes, even when just standing still.

Watching BMW Trophy Challenger winner Tom Thomas float over the course in Bixby MO this summer, I can see how his trials background gave him a leg up on the competition.

Posted by TheBarnQuilter at 10:51 AM No comments:

After considerable debate, mostly with myself, I decided to sell my 2012 BMW G650GS Sertao!

Will take $5,000 or will consider trading for a camper (best option) or a BMW road bike and forgo the Dusl Sport functionality which served me so well.

What will this bike do for you?  Point it up a gulch and roll on the throttle... It will take you to the top.  Hang on and steer with the pegs.

Sand?  Ask the Florida Cads peeps... roll on the throttle and lean back.  Last trip following the leader was 25 miles of 10" deep sand and we never missed a beat.

Lots of stories to share about the history of this bike, but that can follow.  Featured in magazines, won awards at ralleys, been across the country and back.  Time to let someone else enjoy this remarkable dual-sport bike and take on a more laid-back riding style.

All the details to be posted here presently.  Call for details and questions.  Lots of videos available, but most include my custom PVC canisters and hundreds of decals and stickers on my luggage (not included in the sale.) 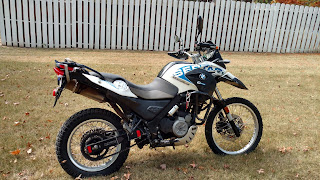 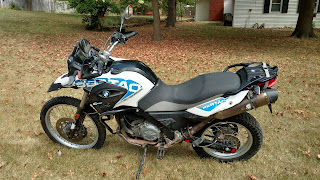 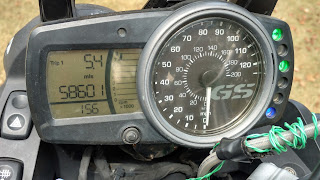 The bike was in for service at every required increment through the 35,000 warranty period.  Since then I have done the oil changes (AMSOIL) and recently rebuilt the rear brake.  Here's the rundown of aftermarket items and what is missing or not functioning:

Handlebar riser
Center Stand (included but not currently installed)
Kuba Link (lowered the rear about 1.5")  DETAILS <<<
Booster Plug (increases low end HP about 5% DETAILS <<< "Best $150 I ever spent."   I installed it when the bike was under 1,000 miles and hardly ever killed the engine since.
Leo Vinci exhaust installed by EuroSport Ashville.  VIDEO <<<

H4 LED headlight from ADV Monster. <<<  HUGE improvement.  Installed at NEFL rally 2015.
Turturo Chain Oiler. Details <<<  From the UK but has a dealer in the US.  Only operates when bike is moving and hitting bumps.  Completely independent of bike electronics.  Read the details.
Oversized foot pegs.  e·quiv·a·lent to power steering when off road.
Flashing brake lights and a large multi-LED light below license plate. (Tractor Supply)
Turn indicator LED lights added in brush guards. (Tractor Supply)
Fuse block added for additional accessories.
DOT plugs wired at rear for additional turn indicators and brake lights which were mounted in my panniers and top box.

Items missing or failed:
Wind Screen (all my event stickers go with me)
Heated grips failed.  Could be switch issue.
Emergency flasher function failed.  Could be switch or flasher timer.
One rear turn indicator is missing the lens but flashes.
Tool compartment lock failed.  Drilled the lock and has a strap to hole it in place.
Seat release latch handle.  Came unhooked and vanished. Use your bare hand or pair of pliers.

This bike was not ridden insanely by a crazy person.  I'm 69 years old and bought it 5 years ago when I returned to motorcycle riding.  Loves sand!  I did the ADV and CADS trans Florida rides 5 times.  Worked for two months in the Mohave Desert (El Mirage Dry Lake, CA.)  Competed in the BNW Trophy Challenge in SC in 2013.

More history on my blog at www.WhereDoesThatRoadGo.com

Why selling?   My lifestyle had morphed into more casual and less opportunity to ride off-road.  As a result I have packed on about 25 pounds and gotten really out of shape.  I would like to find an older more classic style BMW to do road trips and camping.  My g/f doesn't ride so it's just going to be something that I enjoy on my own.  Open for ideas.  Cash is always an option.

Also:  4 rear tires, one highway, others dual sport.
Posted by TheBarnQuilter at 1:46 PM No comments: