Monday: Woke about 6:30. Wandered around buildings looking for showers and gave up. Passer by said, “They are in the back of the building across the street… no sign… Showered. Had leftovers for breakfast, and a jello fruit cup. Loaded top box on the bike with camera stuff and laptop.. Then the kickstand pushed thru the gravel and 500# bike plus equipment buried itself in the clay beneath. Used the approved “put your butt against the saddle, oright hand on the bars, left hand on something convenient, like the bright read exhaust pipe, (although I found a bracket to grip) and lift with your knees.” WOW, that worked. Will have advil soup for dinner, just in case. Drove to town to get online and come up with a route for the day. Started out east and found Visitors Center. Reviewed suggestions and started back going west. Turn right at BP station… BP ain’t there any more. Found a suitable road (has asphalt and white line) and turned north. Nice farm country, much like home. (I could be doing this without the commute?) Turned right in Steele Tavern (Town! out in front of the tavern actually) toward Vesuvious, VA. 58 East is a really twisty route, downhill for this section, with most curves marked 15 or 20 mph. My gps said I averaged 33 mph which is still probably pretty wimpy. Then 151 S to a water stop at a from mom/pop shop. Opened leftover turkey sub from yesterday. Guy pulled it to chat and liked that I was all neon yellow. He’s older (rare) and still has two bikes. Came here on a motorcycle cruise and never went home. Then south to 778 east ans 15 miles of sweeping uphill curves at 55 mph limit. Past the parkway and then 4 miles downhill on twistys to whatever town that was where I started. Stopped at ranger station to pick up a MVA map (motor vehicle accessibility) but they said I sould download it online. I said that the website indicated that they had them available and she pulled out a 125 page book and toled me that I could look at it but not take it. That’s a lot of help. That parking lot was so sloped that I needed help standing te bike up to gt back the road. 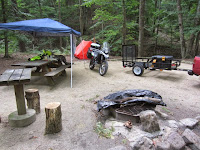 Arrived at camp along with the first of several raindrops. Didn’t last long. I unloaded, discovered that I as illegally encroaching on public land because my tent was on the cushy stuff 24” outside of the hard packed base created for RENTED CAMPERS. I asked if I could excavate the soft humis to the approved area and he agreed that I could have a one night waiver. 3:58. looks like rain is getting bit more dramatic. More later,
Posted by kurtzinpa at 5:06 AM