Tuesday: Weather was cool and cloudy. Valleys were blanketed in cloud-like haze of moisture. Up to Buena Vista in 501, east to Blue Ridge Parkway and then south. Lots of overlooks but several have tree growth blocking the valley views. 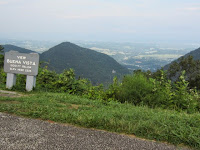 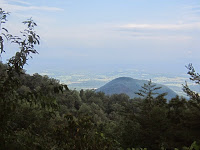 The Parkway had many more motorcycles than cars. Met a couple from Canada 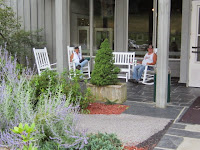 and another from Michigan. Had planned to take the Buchanan exit (locally pronounced BUCK-anan) and started down really winding curves. Half way down came to a road block where some trucker had tried to take the road up and got stuck on a hairpin turn. Troopers were busy figuring out what to do so I uturned... (what a hoot on a banked downhill narrow road!) and headed further down the parkway. Found a really pretty lake on the east side of the road and stopped to launch photo project... Marvelous camera, high-powered lens, TWO dead batteries. Did some shots with Canon elf camera. Not bad for a pocket camera. 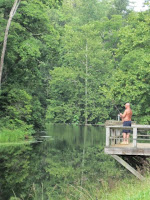 Made it to Roanoak and headed back north by northwest on rt 220. Scenic route, pretty straight but comfortable. very little traffic. Got to Clifton Forge and the sky was getting pretty dark. Asked for direct route to Lexington (people are really cheerful and helpful around here!). Hopped on 60 W and high tailed it (few drops caught me) back on 70 MPH 4 lane. Arrived horse park and figured I would let the storm pass before putting up the tent and awning. Spent an hour at laundramat and then back to pitch camp and enjoy hot meal. 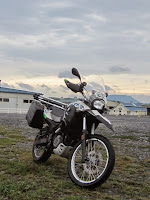 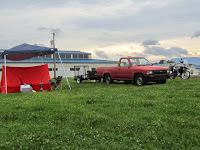 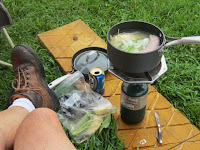 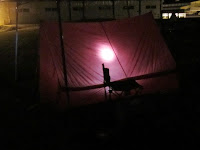 Posted by kurtzinpa at 5:27 AM