This was a great weekend with the (mostly) GS Giants from the midwest and east.  MO, IL, MI, PA (me), TN, GA and points else...  Clayton Anderson made it in on his way back from a summer job as a motorcycle forest ranger in Idaho!  Several families took the occasion to bring younger riders and we had a great mix of talent and spirits! 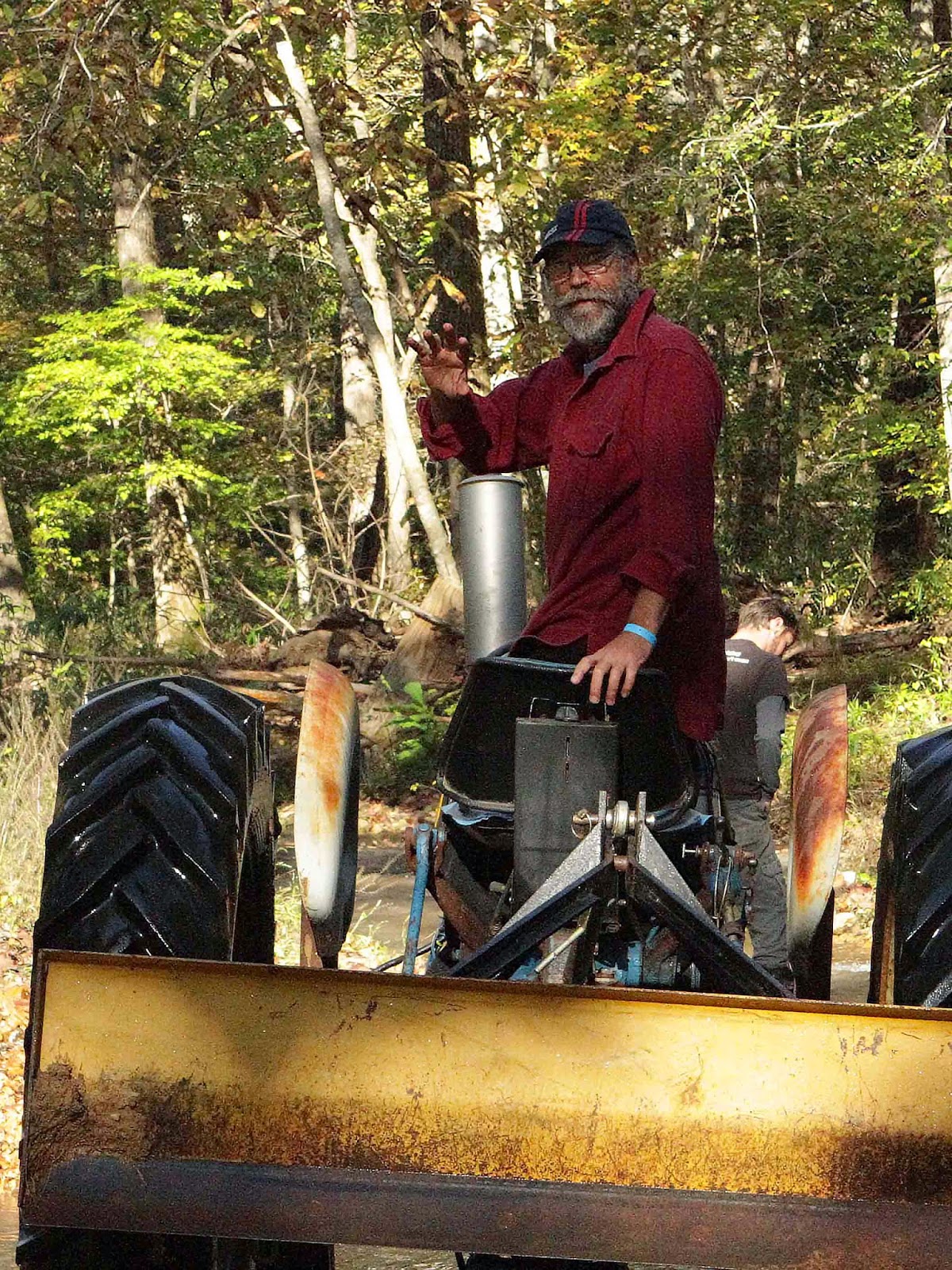 Lets start with arriving on Thursday to find that the setup crew was still finishing the bridge installation.  This is an annual job since the creek is strong enough in the spring to move anything not planted by nature... and a few things that are.  Last year the event was canceled due to host Lee Wagoner being stuck down by a mosquito... west nile virus...   Welcome back Lee!

The plank bridge was an interesting experience.   The planks look like big 4x12's strung on a cable across the creek.   As bikes and trucks drove across, the ground crew worked on adding gravel and trying to change the flow of the creek.  Lee dredged the stream below the bridge in hopes of lowering the pool of water at the bridge...   that seemed to help, somewhat.

Mostly, adding gravel on top of the planks seemed to be the winning ticket.   The bridge served thru the weekend and was then removed for another year.
I was lucky enough to be the first bike to cross...  I made the comment that speed helps and launched my 650 toward the decking.  The first part was fine, and must have been in shallow water.   The second half of the bridge was floating and, dumb luck, I was going fast enough that the planks didn't have time to sink beneath me.   Walt, on an 800, went second.  Everyone cautioned him to go slow and, sure enough, when the planks sunk beneath him he killed the engine.  In the course of the weekend Walt had a number of interesting attempts (vs. accomplishments).   I'll leave those stories to Walt.

The rally committee was great!  Then welcomed us in, passed out meal and door prize tickets and directed us up the hill to the grassy campsites.   Tents were strewn up the hill, with the early arrivals from Alabama claiming the only FLAT spot in town...   By roll of the dice the guys near my tent were Jordan (Snore Monster), Walt and Don.  We each took our own rides over the weekend and enjoyed the poking fun and potential of riding again.

Here's the link to photos from the weekend... I don't want to post everything here.

Let me add that food was abundant!  After all,,, it's called RibFest for a reason.   The late night guys on Friday were preparing hickory coals for the two grill pits.  Definitely more that you could eat.   I had two sides of BBQ chicken that was done just the way I like it... messy.  Didn't take any food pics.   drat.   Contributions welcome. Also thanks to Mr. Don and his excellent choices for breakfast servings.   Sausage, veggies and eggs are a sure hit!

The weekend was perfect fall weather for being on the backroads of TN.  Streams were down but not empty so we all did some water crossings.  The Saturday sport activity was the GS track that saw about 15 bikes take on the challenge.  From two young men in a "youth" division to the regulars like Dan Dickie and Blair Young, everyone had a good time.  Revit offered donated great door prizes and items for the event winners.

Here are a few photos of the competition...   Other than that I was busy eating and sharing stories and didn't shoot much.   Ribfest is definitely a great weekend...  and take the opportunity to include your kids! 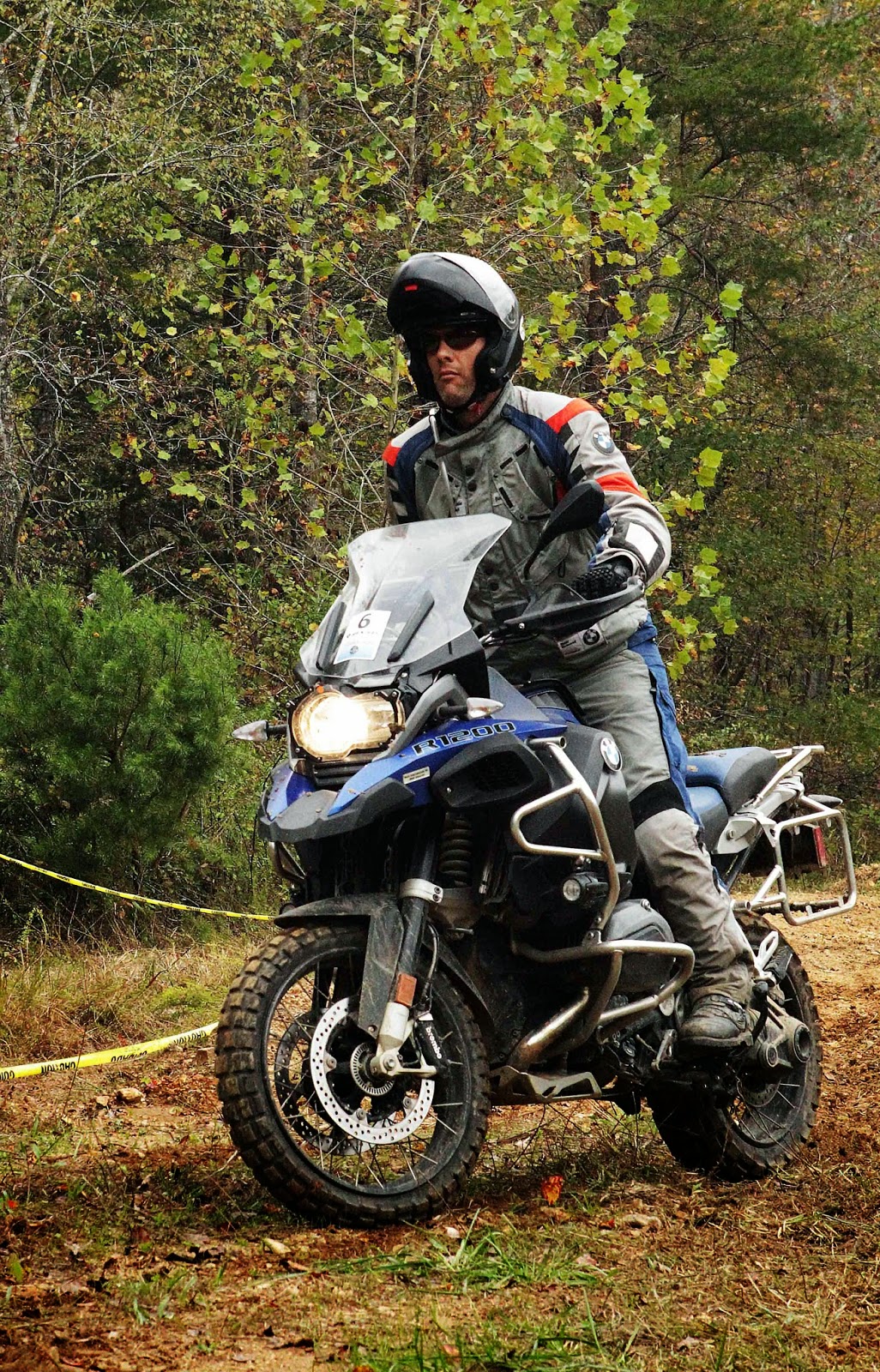 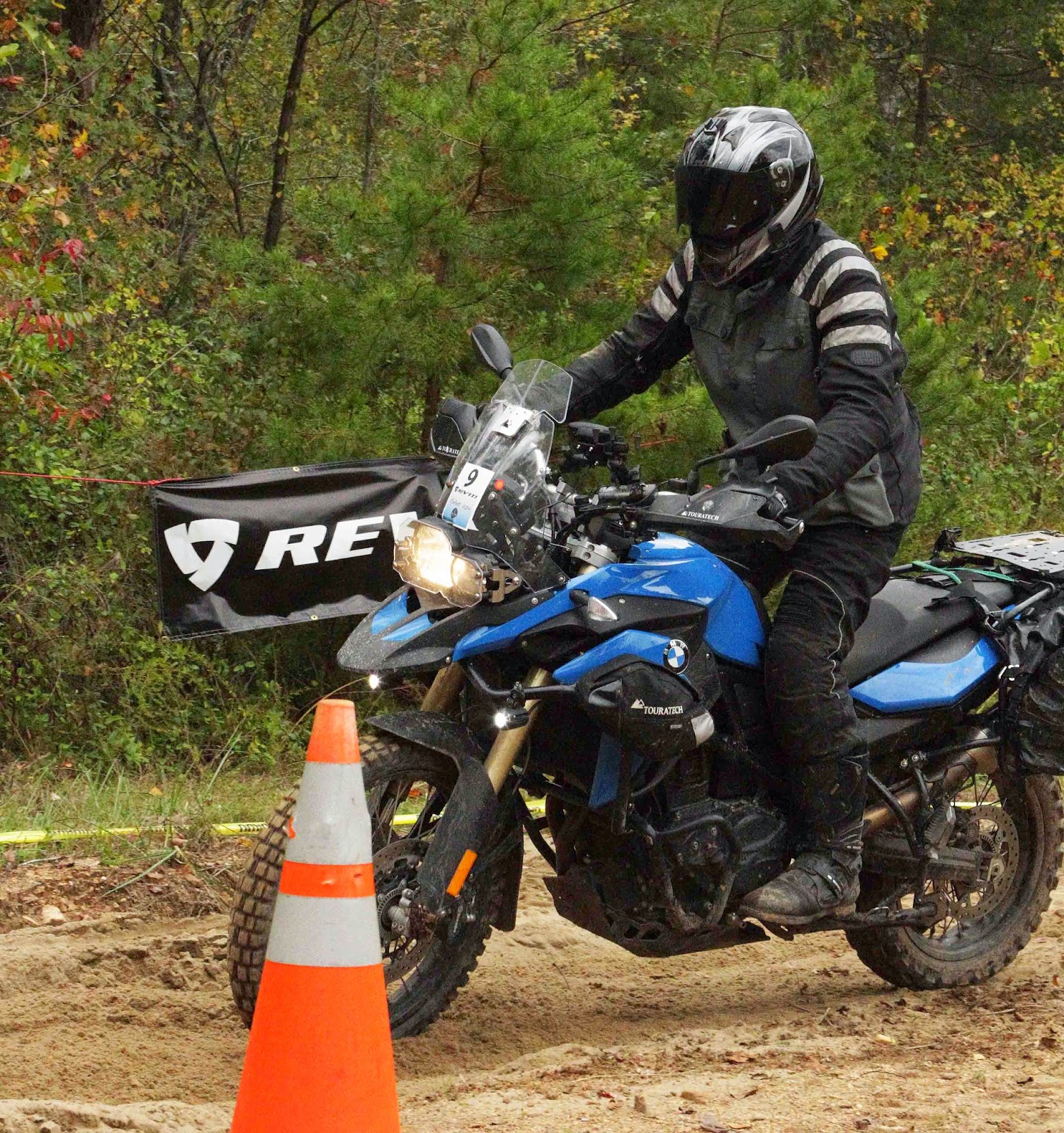 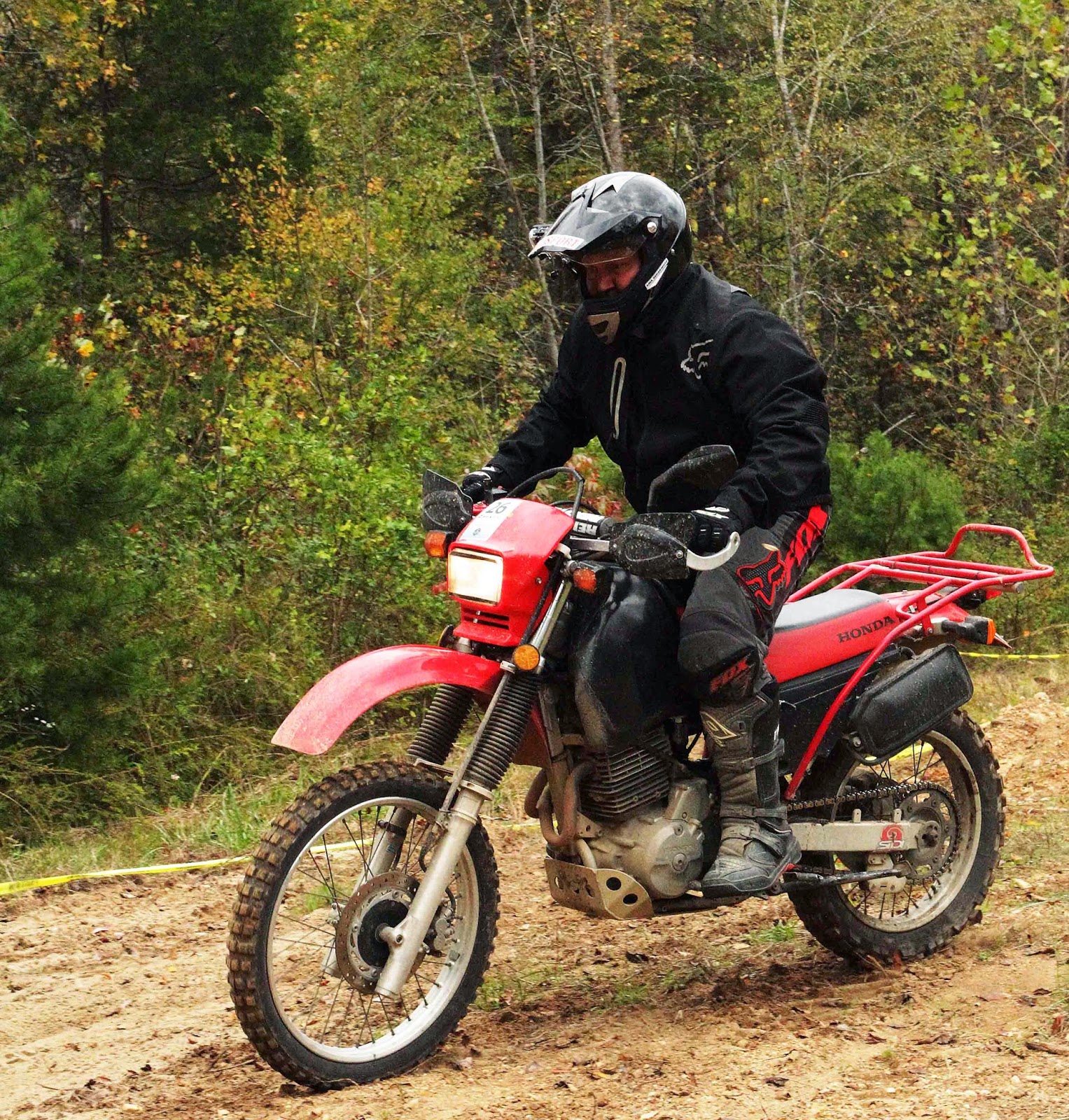 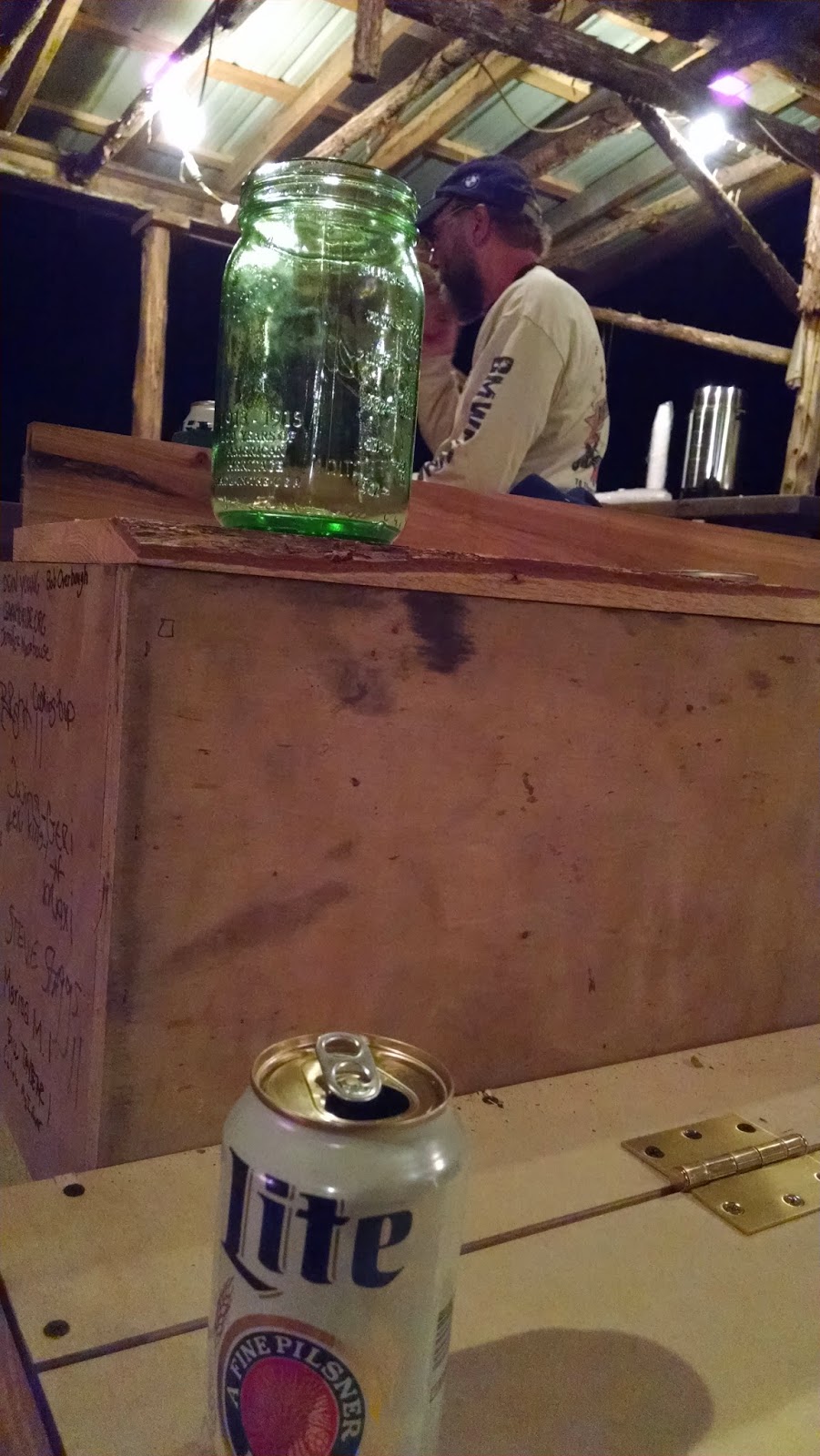 As with most rallies, the evenings included entertainment and
beverages (BYO).   Somehow on Friday (or maybe it was Saturday by then) I woke to laughter and headed back to the pavillion to explore.   Finding hald jar of potato 'shine', I hung around and shared the remaining brews and story telling... lucky for me the other guys were further gone and didn't remember whither I had told the same story earlier...  Always a good time.

This just in (11/2/14):  Jim Bean caught me in action staging for the Slow Race!  I was already several beers into the cooler but it didn't seem to help my skill.   The high point of the competition was Lisa Goff outdoing her son in the slow race and yelling, "Who's your mommy?"

Big thanks, again, to Lee Wagoner for hosting the show on his property.   and thanks to all the participants who continue to be Giants!

Posted by kurtzinpa at 6:57 AM