Things that fall off... 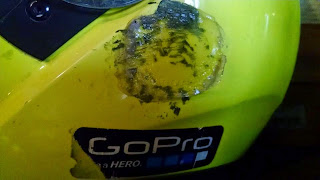 Happened again on Saturday... and I just found out! We were driving back from Grassroots BMW and when arriving home Donna told me that she thought she saw something come off of the bike.  She said it was black like a piece of a tire.

This morning I went out to the garage to put my GoPro camera into the helmet enclosure and discovered that the enclosure had come unglued from the helmet!!   ARGHHH...   At least the camera wasn't in it.

You know,,, last night I was in the kitchen and said to myself, "That electric skillet is in an aqward position..."  Five minutes later I knocked it to the floor...

I have been telling myself, ever since my last came off of my glove strap, that this thin needs a lanyard.   I even cut a piece of monofilament to tie the camera enclosure to the helmet strap but "never got around to it."   Obvious problems need to get a higher priority in my life.

Before climbing out of bed today I was thinking back thru things that have come off my bike... and other people's stuff that I have watched leave to become road-kill trash.

Trust me... if it's bolted, glued, velcro'd or welded... it will STILL come off.  Back everything up with lanyards or safety chains.   And make sure the safety chain isn't going to reach as far as your spokes!!

Posted by kurtzinpa at 8:48 AM