Fun afternoon at El Mirage!   First ride was a fun climb up one of the foothills of the Shadow Mountains north of the lake.   More to post later.

Here's today's scoop.   Friend Alan from south of here picked up on my invitation of a forum to ride here in the desert.   He came over and we swapped stories while he unloaded and then we started down the (up the) camp road to the base of the shadow mountains.  Alan stands about 6' 3" and is built like a football player...  I could tell he was chomping at the bit to get up into the rock trails so when we reached the end of the road I let him lead the way up onto one of the foothills of the Shadow Mountains.   What a hoot!!!   Was a really great climb and we both managed it well.


The video from the downhill return trip had a glitch so you miss the big BANG when I clipped a rock with y right side canister... PVC TLC will start tomorrow...

We headed back to camp to put my stuff that had been in the canister away and then headed to the other trails.   I wasn't feeling must right so I asked if he would mind looking for sand and mud around the lake.  We headed west on Lake road to the north fence line and took turns leading the way through the sand, brush and mud slicks... 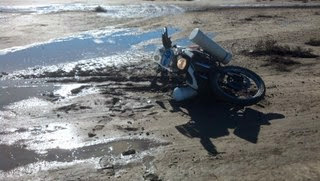 Ever hear the phrase, "If it's gray, stay away?"   There were some guys riding out on the lake bed which is now closed due to water and mud...  When we reached the north boundary markers I leaned into a right turn right while I was crossing a mud slick...  Landing in sand is such a blessing...   The rest of the ride to the west end of the lake went pretty well.  Most of the road was just wet sand.   Where it got deep we kept the speed up and took out chances on the woop's.   I know that my front forks bottomed out a couple times.

At the far west end of the property the fence line crosses the lake with a sign reading, "NO access to south when lake is closed."  We pulled up there and talked about the SCTA peeps who live along that fence on the private property side... lots of (like hundreds) old cars and trucks just rusting away...   Alan suggested that the economy would get a great boost if the owner would sell the vehicles and let hobby people buy them for restoration projects... lots of parts and labor would come out of putting the rigs on the open market. 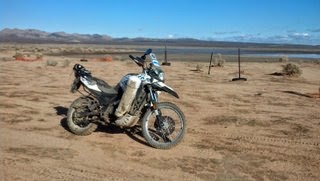 When we turned around and headed back Alan led the way.  I commented that at least if he fell I would know not to follow that track...   Doesn't he get into a big patch of waterholes and mud and was waiving me off as I approached.   He managed to stay upright but the tracks were fun to see.

Most of the lake ride was between 30 and 45 mph in an effort to stay on top of the sand.   It wasn't as deep as last week due to the rain, but most of the trail was 2-3" of loose stuff, so there was no way to drive it slow.

I am certain that we passed one of the SCTA guys who was standing by on his side of the fence, but there was no way to slow down and chat at that point.

The water holes filled some of the woops and that was a bit of a challenge...   finding a line to stay in the dry stuff at 45 MPH, and dunie bushes all over, was a good trick.   I had no choice at one point than to drive thru a water hole and took a pretty good shower...   Made it thru though...  That might be on one of the videos... will post later.

Once we reached the Hess Ranch (along the north fence) we were on pretty good roads and made short work of the 3 or 4 miles back to camp.   Always a good thing to end the day with a comfy ride to the finish.

Back at camp we shared a couple brews (Thank you Alan) and talked war stories while I admired my fresh mud coating and Alan loaded his bike...   You should see this dude run his bike up into his truck... advantages of being a semi-giant. 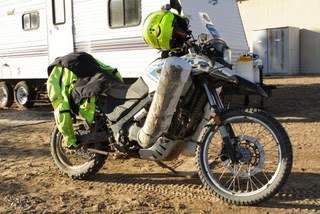 Sounds like Alan enjoyed the adventure.   He asked how he could get in on this BLM volunteer program so I told him about the Ambassador volunteers and forwarded his name to the boss for getting linked up. 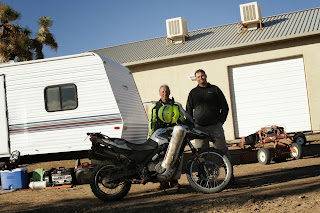 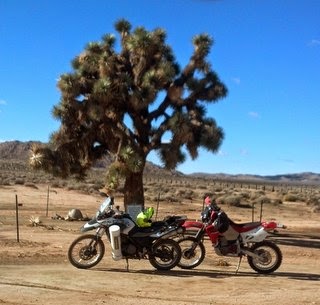 Will try to get to the other videos soon.   Travel safe!    Jeff