I told her that, "If it doesn't fit on the bike, it's not going."   And then I started packing.

Clearly the panniers and top box weren't going to cary enough for long term touring with the bike and a tent.  This shot is the NEFL BMW rally at Camp Blanding Jan, 2013.  about 100 miles on the new canisters.

To give you an idea what I was working with, this shot is one of the original canisters, schedule 15 PVC pipe, used for sewer drains.  The lids slip on, but aren't very tight.  I lost several into the breeze over the first few months.   Lanyards would have been a good idea.

Let me show you here the attachment for the rear side canisters mounted on the passeger pegs.  1 1/2" PVC pipe connectors screwed into pipe caps.   Originally I secured the containers to the bike with bungie straps but I have progressed to less stretchy fiber straps from BMW.

The short tube on the right side now contains a one gallon cylindrical water bottle (disani or nestle) and is used for hauling fuel.   Will let you know how that works out...

The schedule 15 PVC didn't stand up very well to tumbles in the sand and fire roads in FL, GA and states north.  When I arrived home in July, 14,000 miles, the front canisters were pretty well broken up and sported duct-tape, shipping tape and more bungies.

Driving back to my plumbing supply guys at Mark's Supply in Shendendoah, PA, I upgraded to schedule 40 tubes and caps.  I also changed the mounting on the front tubes to still use 1/4" u-bolts but added an inside and outside extra layer sandwiching the tube walls and spreading out any stresses during impacts.  I'm now at 55,000 miles and that situation appears to be cured.
New layered u-bolt attachment >>>

Now, at 55,000 miles and plenty of rough handling, things have settled down.   Notice the tube sticking out from the rear.  Only about 16" long, hose clamped to bike frame and to the pannier mounts.  Threaded end cap.  When I am off roading now I have plenty of storage without taking the panniers or top box.  The pannier on that side gets an extra tie-down strap because it no longer rests on the support bracket correctly. 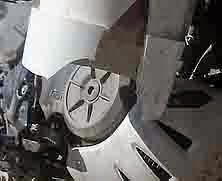 Before I close this story out, I'll share a couple things...   One weekend in November in the Mojave Desert, El Mirage Dry Lake, a buddy (Alan) came out to ride the ridges...  We went up one ridge with no problem (video to follow) but coming back down I brushed a bush on the right and was answered with a resounding CRACK(!) like a baseball bat...   Seems a rock was hiding there just waiting for my canister...  This is the one which is now somewhat shorter with a wood bottom, mounted on the left side passenger peg.

This pipe isn't cheap and only comes in 12' lengths.   I called home to my neighbor and he took a piece I still had there down to the pipe shop (UPS shipper) and had a cap added and shipped it to me in CA.

Posted by TheBarnQuilter at 3:09 PM